Hundreds of people expected to be evicted from their hillside homes in a slum of Colombia’s capital Bogota on Friday, despite having nowhere to go during the country’s coronavirus lockdown.

Brazil lost its second health minister in a month on Friday after President Jair Bolsonaro demanded an endorsement of risky anti-malarial drugs to fight the coronavirus outbreak, adding to turmoil in one of the pandemic’s worst global hotspots.

As the coronavirus outbreak in Ecuador’s largest city of Guayaquil begins to stabilize, the government is bracing for worsening spread in the highland capital Quito, where at least six people have died in the streets in the past month. 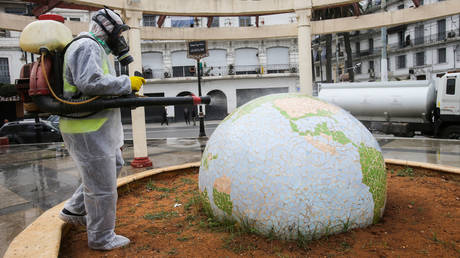 As coronavirus paralyzes the planet, RT documentary channel RTD has gone on an online world tour to learn from locals about the common dreads and unique problems caused by the pandemic faced by the world’s nations.
Read Full Article at RT.com

We’re looking for someone who: Can produce and edit great content. You can write and edit quickly, you’re a grammar nerd, you can upload content to a website and you’re into social media, video and photography.  Believes in our values and mission. You have read our 10 principles and are passionate about shaping the future […]

The post We’re hiring an editor appeared first on The Discourse..

Thousands of cyclists took over the centre of Ljubljana once again on Friday to protest against Slovenia’s centre-right government of Prime Minister Janez Jansa, less than a day after the government called an end to the coronavirus epidemic, while loos…

Panama has extended by one month to June 22 its ban on international flights due to the coronavirus outbreak, the country’s aviation autority said on Friday.

It’s been a few weeks since many of us have had the chance to dress up and go for a nice sit-down meal at our favourite restaurant. Crystal Alberta Godsalve can’t remember when she last had that luxury. “It’s been a long time.” Godsalve has been living at the Lethbridge Shelter for some time now and […]

The post A gold lining in this dark cloud appeared first on The Discourse..

An Omaha, Nebraska-based private jet company whose principal owner donated generously to Donald Trump and Republicans ahead of the 2016 election received $20 million in taxpayer aid from the federal bailout package passed in March.

Jet Linx Aviation, which caters to well-to-do CEOs and executives, was the second private plane company founded or owned by Trump donors to receive federal funds designated for the airline industry under the Coronavirus Aid, Relief and Economic Security Act. CNBC reported on Thursday that Clay Lacy Aviation, a Van Nuys, California-based private jet company whose founder has given nearly $50,000 to the Republican National Committee and Trump, got $27 million in federal funds.

Jet Linx Management Company Vice Chairman John Denny Carreker and his wife, Connie, gave $68,100 to Trump’s campaign, the Republican National Committee and the Trump Victory Committee between October 2015 and November 2016, Federal Election Commission filings show. Connie Carreker gave an additional $1,000 to the Trump campaign in November 2018, according to the FEC.

Note: If you develop emergency warning signs for COVID-19, such as difficulty breathing or bluish lips, get medical attention immediately. The CDC has more information on what to do if you are sick.

Most of the CARES Act money for the airline industry has gone to commercial or regional carriers. American, Delta, United and Southwest collectively were allotted almost $19.5 billion, more than three-quarters of the total reserved for the passenger airline industry.

But private charters haven’t been left out.

About 70 such companies received CARES Act funds as of April 27, according to the first round of disclosures to 96 recipients published this week. That represents just a fraction of the roughly 2,000 private jet companies operating in the U.S., as compiled by Private Jet Card Comparisons, an independent buyer’s guide. In total, they received about $157 million in taxpayer aid, less than a percent of the more than $23 billion disbursed so far for the passenger airline industry.

Jet Linx and Clay Lacy are among the most prominent in the industry: Last year, the flight tracking firm Argus Traqpak ranked them fifth and 11th, respectively, in hours logged, according to a list of the top 25 private air charter operations. No other top 10 private jet company received federal grants. The average grant amount for the 70 private jet companies to receive aid was $2.2 million, about a tenth of what Jet Linx and Clay Lacy each received.

A number listed for the Carrekers at their Dallas home wasn’t in service, and a press representative for the company hasn’t responded to emails seeking comment. A Treasury Department spokeswoman said campaign contributions play no role in determining which companies received federal funds, requirements that were set by Congress.

CNBC reported that Clay Lacy did not respond to a request for comment on its reporting.

Lawmakers set aside $25 billion for passenger airlines in the coronavirus relief bill. Companies that earned at least half their revenue last year by flying people from place to place could apply for grants from a special program within the CARES Act designed to cover payroll and benefits for workers. The size of the grants companies received is supposed to be based on how much they paid their employees in salary and benefits between April and September last year. The law restricts how much executives are allowed to take in compensation.

The Treasury Department declined to say how many total companies applied for the payroll grants, how many were private plane companies or how many applicants were deemed ineligible for funds. A spokesman for the Transportation Department said officials verified that applicants held up-to-date “certificates and authorizations” before the Treasury distributed them money.

It wasn’t clear when the other passenger airline companies granted payroll aid would be publicly disclosed.

Jet Linx claims an 112-aircraft fleet that flies out of 18 cities where it operates its own private terminals. The company says it has 450 workers, who serve as flight crew and operations, maintenance and support staff.

Jet Linx offers well-heeled customers membership packages that give them access to luxury plane rides for a fee. On its website, Jet Linx offers members who pay $5,000 up front access to any size jet for pay-as-you-fly costs. Hourly rates can run up to $4,500 per hour.

Do you work for a company that was denied CARES Act funds? If so, or if you were laid off from a company that received the federal aid, email Jake Pearson at jake.pearson@propublica.org

<!– Insert everything below in the
. –>This form requires JavaScript to complete.
Powered by Screendoor.

Normally, the May long weekend marks the unofficial start to summer, as people flock to parks, cottages, and other getaways. This year, it will mark two months since British Columbia declared a provincial state of emergency in response to the COVID-19 pandemic. And, with the state of emergency expected to remain in place for the […]

The post Stay close to home this weekend: Cowichan leaders appeared first on The Discourse.. 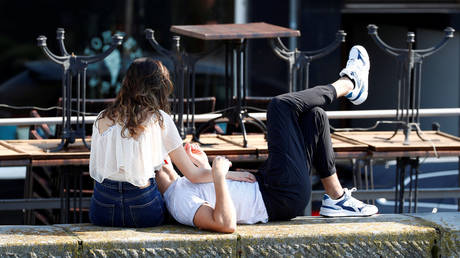 Dutch authorities have decided that sex is a necessity, even in times of lockdown. Ever the pragmatists, they suggest that quarantined singletons “make arrangements” with a willing partner.
Read Full Article at RT.com

The nail care section of the Femme salon in Rome looks almost like a prison visiting room with a row of people on one side of a glass partition and visitors on the other.

Brazil’s outgoing health minister Nelson Teich said in a press briefing on Friday that he had decided to resign from his position, becoming the second person to leave the top public health position in less than a month in the midst of the coronavirus p…

After Ivory Coast’s government announced the easing of some restrictions aimed at curbing the spread of the new coronavirus on Thursday evening, Ange-Désire Indat hit the phones and invited more guests to his wedding planned for the next day.

Portugal will reopen its beaches on June 6, prime minister Antonio Costa said on Friday, and he encouraged the public to download an app that will tell them if their beach of choice is full or still has space.

Namibian president Hage Geingob announced cost-cutting measures on Friday to save up to 200 million Namibian dollars ($10.80 million) as the country battles with the impact of the novel coronavirus. 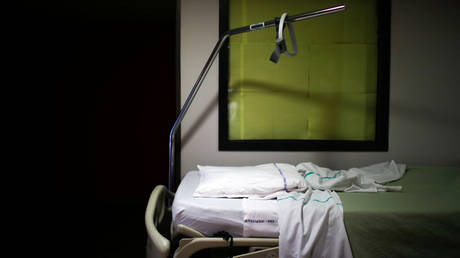 A nine-year-old boy in France has died from the mysterious Kawasaki-like disease, which some medics link to Covid-19. It’s the first such case in that country, but similar child fatalities were earlier recorded in the US and UK.
Read Full Article at RT.com

The United States is continuing its drawdown of troops from Afghanistan and is expected to meet a timeline that had been agreed upon with the Taliban earlier this year, the Pentagon said on Friday.

Georgian President Salome Zurabishvili on Friday pardoned two opposition politicians, a former mayor of the capital and an ex-defence minister, in a move to reduce political tension ahead of a parliamentary election this autumn.

Uruguay extradited a Mexican citizen to the United States where he is charged with international conspiracy to distribute cocaine and amphetamines, U.S. officials said on Friday.

Charli XCX wraps up this season of Inside the Candy Shop on Apple Music by celebrating the release of her new album, how im

Cars will be banished from miles of streets in central London to encourage more walking and cycling and help public transport cope with social distancing restrictions, the city’s mayor said on Friday.

Going into the long weekend, as British Columbia begins the second phase of its reopening plan, how are Indigenous-owned businesses doing? We are checking in with businesses in the Okanagan to find out: How have they adapted during COVID-19? What challenges have they faced? What’s been working? And, what’s next? Kekuli Cafe When Kekuli Cafe […]

The post Don’t panic, they have bannock: How Kekuli Cafe is adapting to the COVID-19 reality appeared first on The Discourse..

Two brutal attacks this week laid bare major weaknesses of the U.S.-Taliban troop withdrawal pact: nothing in it obliges the Taliban to prevent such massacres and the Afghan government’s ability to thwart them will only wane as U.S. troops pull out.