Descriptions of emergency rooms and intensive care units in China and Italy paint a grim picture: Doctors forced to treat patients in hallways instead of intensive care units, military helicopters ferrying patients to hospitals with available beds, and entirely new facilities constructed within days to handle the massive overflow of infected residents.

But even in these countries, there’s a higher number of hospital beds per capita than in the United States. America lags behind with 2.8 hospital beds per 1,000 people, compared with Italy (3.2), China (4.3) and South Korea (12.3), according to recent data from the Organization for Economic Cooperation and Development, an intergovernmental institution that tracks societal indicators. When it comes to intensive care beds, the United States compares more favorably, several studies have suggested. Still, the impending shortage of overall hospital beds puts regional systems at risk of breakdown.

Look Up Your Hospital Region

Search for how well hospital regions near you will be prepared for COVID-19. 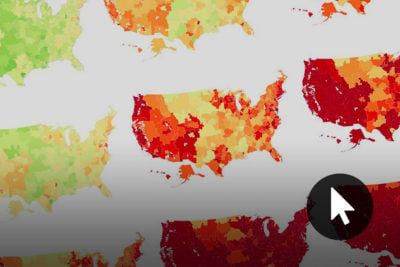 Are Hospitals Near Me Ready for Coronavirus? Here Are Nine Different Scenarios.

How soon regions run out of hospital beds depends on how fast the novel coronavirus spreads and how many open beds they had to begin with. Here’s a look at the whole country. You can also search for your region.

To understand how hospital capacity could vary region to region during the pandemic, ProPublica used data that was modeled by Dr. Ashish Jha and his team of researchers from the Harvard Global Health Institute.

What data was used to create the models?

For the analysis, Jha and his team looked at various scenarios, in which 20%, 40% and 60% of the adult population would be infected with the virus, many of whom would have no or few symptoms, and examined whether hospitals had the capacity to handle them if the cases came in over six months, 12 months and 18 months. Hospital bed figures were derived from recent surveys conducted by the American Hospital Association and data compiled by the American Hospital Directory. The researchers divided the country into slightly more than 300 regions, also known as hospital referral regions, a technique that is common in health policy research. They excluded one region (Panama City, Florida) because of data irregularities. Only short-term acute care and critical access hospitals were included in the models. Not included were children’s hospitals, psychiatric hospitals and long-term ventilation rehabilitation facilities that treat ventilator-dependent patients without the capacity to treat acutely ill patients.

The models assumed uniform infection rates over each time period with steady hospitalizations, and did not account for possible spikes or dips in new cases. Though in all likelihood infection rates will not be uniform, this model does not take into account the speed of spread for COVID-19.

To understand current capacity, the team incorporated average hospital occupancy rates in each region. They also accounted for the percentage of residents in each region who are older than 65, those most at risk for serious illness in the current pandemic. The data assumes each patient will have a 12-day hospital stay, based on data from China.

How did they come up with the three infection rate scenarios?

The infection rate scenarios are based on estimates from leading epidemiologist Dr. Marc Lipsitch, head of the Harvard T.H. Chan School of Public Health’s Center for Communicable Disease Dynamics. 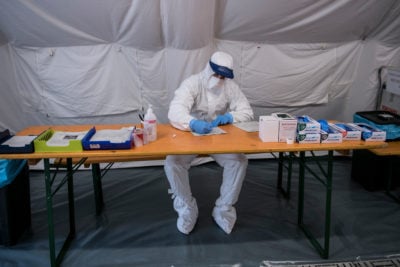 We Want to Talk to People Working or Living on the Front Lines of Coronavirus. Help Us Report.

Are you a public health worker, medical provider, elected official, patient or other COVID-19 expert? We’re looking for information and sources. Help make sure our journalism is responsible and focused on the right issues.

His models, which use historical data on flu pandemics and estimates of coronavirus reproduction rates, have found that between 20% and 60% of the adult population could contract the disease, depending on how well it’s controlled and how transmissible the virus ultimately is. Even with the social distancing measures being put in place today, Lipsitch estimates that at least 20% of the adult population could get the disease, about double the number of people who’ve gotten the flu each year. We are early in this pandemic and much can change, which could cause models to be adjusted.

The percent of the population infected in China’s Wuhan region currently appears much lower than 20%. Why is the minimum infection rate in the model 20%?

While these estimates are higher than the current rates of confirmed infection in the hard-hit areas of Wuhan and northern Italy, Lipsitch cautions that the current picture in these regions is not an indicator of the ultimate spread of the virus.

“Wuhan is not done, they are on a pause,” said Lipsitch, adding that if the region relaxes its social distancing measures, which in the past few months have included mandatory quarantines, “they are going to have a resurgence in the epidemic.”

Moreover, not all patients who are infected show symptoms and many do not get tested at all. During the H1N1 swine flu pandemic of 2009, the Centers for Disease Control and Prevention estimated that about 20% of the U.S. population was infected.

The vaccine will take at least a year to a year and a half before it’s ready for widespread use, according to Dr. Anthony Fauci, director of the NIH’s National Institute of Allergy and Infectious Diseases. Until then, the virus will continue to spread until enough people have developed an immunity to the virus to break chains of transmission, also known as “herd immunity.”

How did they come up with the three time periods?

Taking into account possible social distancing measures, Jha and his team modeled the range of infection rates over three time periods — six, 12 and 18 months — to understand how slowing the spread of infections could affect hospital capacity.

ProPublica launched a tool that allows you to look up how the number of patients with COVID-19 could affect hospitals in your area under various scenarios. Here’s how to write a local accountability story with the data.

If the country only enacts moderate social distancing measures, such as reducing the frequency of large gatherings, the disease could spread over a short period of time, like six months, and overwhelm nearly all of the nation’s hospital systems. With more extreme measures, like the types of quarantines used in Wuhan, the disease could be spread out over 18 months or longer, which would decrease pressure on the nation’s hospitals.

How did the experts estimate what proportion of people infected would need hospitalization? How uniform has that been country to country so far?

Fill Out Our Questionnaire

“affront.” “cancelled” “not a time to joke” advised asked attacking Bild caution cited impractical labelled pointing out refrain remind said shared tweeted wondered wrote
We use cookies to ensure that we give you the best experience on our website. If you continue to use this site we will assume that you are happy with it.OkPrivacy policy