by Katy Reckdahl for ProPublica

This story was co-published with The Times-Picayune | New Orleans Advocate.

NEW ORLEANS — Shanbriel Williams was determined to use this year’s tax refund for a new apartment, one with more space for her growing children. By mid-January, she had found a rental less than a mile from Popeyes, where she works in the kitchen. She told her son, Markhi, 7, and her daughter, Caylie, 4, whose faces lit up at the idea, and submitted an application to the Housing Authority of New Orleans, which helps her pay rent through Section 8.

She planned to move in at the end of February, right after Mardi Gras. She didn’t expect they’d find themselves homeless in the thick of a pandemic.

For those who rely on government agencies to help meet their basic needs, the coronavirus has added a layer of danger to the everyday reality of navigating slow-moving bureaucracy that may now be exacerbated by skeletal staff and virus protocols that don’t allow for face-to-face conversations. This is particularly pronounced in New Orleans, a high-poverty city where a quarter of all renters depend on vouchers from its notoriously dysfunctional housing authority.

Last week, days after President Donald Trump had declared a national emergency, ProPublica watched as tenant after tenant scheduled for appointments at HANO was turned away at the door and told that the offices were closed, even as officials insisted it was still open.

Rosalind Penny, 52, had applied for an apartment on Feb. 6 and had hoped to be in it by March. Instead, she’s been sleeping on the couch at her daughter’s house. 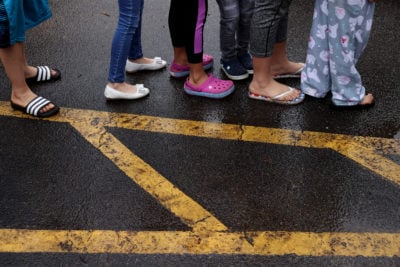 Domestic Violence and Child Abuse Will Rise During Quarantines. So Will Neglect of At-Risk People, Social Workers Say.

Patchwork social service departments are scrambling to address the fallout of coronavirus restrictions, and social workers say vast numbers of at-risk, elderly, sick and disabled Americans will be imperiled. “We are going to see some deaths.”

She said she found a desk in the hallway at HANO blocking the way to the Section 8 office. An employer said that the office was closed but emphasized that there were people working inside. “I guess they’re working,” Penny said, “just not for me.”

On Monday, HANO spokeswoman Lesley Eugene Thomas issued a news release announcing the office was closing due to a stay-home mandate. She said an emergency preparedness plan had been in place for a week, to restrict public access to the offices, that signs had been posted on HANO’s buildings and that “participants were notified via mail, phone, and e-mail of operational modifications.” She said pending move-ins would continue to be conducted and that contracts could be signed via DocuSign.

She could offer no explanation for the string of people who were turned away last week after confirming their appointments by phone.

Williams, 26, started to worry as the lease for her old apartment ended. She still had no contract for her new apartment, and said no one at HANO could explain the holdup. She had to move, packing as much as she could into her worn Nissan Altima, paying to put the rest in storage.

She burned through the little money she had on nights at a motel and the $950 deposit on the new apartment, once the inspection was finally completed in early March. But days passed, then a week. She still had no contract and no key.

Williams tried, unsuccessfully, to get her new landlord, Josh Bruno, to refund the deposit so she could pay for more motel stays. He wrote in an email: “You should be putting pressure on HANO, not us.”

Bruno told ProPublica that he’s unsure what went wrong in this case. Typically, he said, it takes about three weeks for HANO to create a contract after an inspection. “Our goal is always to move people as fast as possible, otherwise we lose rent,” he said. “But we can’t move someone in without a lease.”

As officials closed public schools and told people to practice social distancing, Williams and her children wound up packed in an apartment last week with six other relatives. Williams made a pallet of blankets and slept on the floor; the kids slept six to a mattress with their cousins and awoke with eyelids heavy with fatigue.

Williams said she went in person to HANO on March 13. Her caseworker was off. A supervisor told her that all of her paperwork was in order but that she had no idea when the contract would be done.

Six days later, after ProPublica asked HANO about her contract, Williams got a phone call within minutes, saying it would be finished the next day. This time, it was.

On Friday, as Williams cooked for her children in her new kitchen, others waited for their turn, including Penny, who said she was told that same day, by a HANO supervisor, not to expect a contract until April.

That afternoon, Mayor LaToya Cantrell stood behind a podium at City Hall and issued a stay-home mandate. “The more people who stay at home,” the mayor said, “the more lives we will save.”

<!– Insert everything below in the . –>This form requires JavaScript to complete.
Powered by Screendoor.

“affront.” “cancelled” “not a time to joke” advised asked attacking Bild caution cited impractical labelled number pointing out refrain remind said shared tweeted wondered worldometer wrote
We use cookies to ensure that we give you the best experience on our website. If you continue to use this site we will assume that you are happy with it.OkPrivacy policy