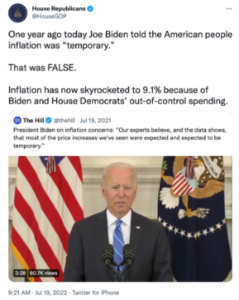 One year ago today, Joe Biden told the American people that inflation was “temporary” after the Consumer Price Index (CPI) increased to 5.4%. Since then, inflation has skyrocketed to 9.1% – the highest rate in over 40 years.

MAKE NO MISTAKE: Biden was wrong about inflation, just as he has been about every economic decision since becoming President. Biden and House Democrats own America’s inflation crisis, no one else.

IT’S SIMPLE: Inflation was NOT “temporary.” Inflation is a tax on ALL Americans and has continued to skyrocket because of Biden and House Democrats’ out-of-control spending. Instead of addressing America’s inflation crisis, House Democrats are pushing for BILLIONS more in government spending this week, which will only worsen America’s inflation crisis.

The post One Year Ago Biden Claimed That Inflation Was Just Temporary; It Has Since Skyrocketed appeared first on www.gop.gov.

According to a new Fox News poll, a shocking 75% of Americans are experiencing hardship because of Joe Biden and House Democrats’ inflation crisis, and the majority of Americans expect the economy to be worse next year.

Unfortunately, House Democrats are working to pour more fuel on America’s inflation fire by passing a liberal wish list package with tens of billions of dollars in reckless spending for their Far-Left Socialist agenda.

Democrats are allowing taxpayer dollars to be used to fund abortions:

Democrats are increasing spending on non-defense programs by 14%:

DON’T BE FOOLED: Instead of addressing the economic crisis plaguing Americans, Democrats are doubling down on their Far-Left agenda and reckless government spending, which will further fuel inflation.

Joe Biden and House Democrats’ open borders, mass releases, and zero enforcement policies have created the worst border crisis on record. According to U.S. Customs and Border Protection (CBP) data, there were 207,416 migrant encounters at our southern border in June, making it the worst June on record.

BOTTOM LINE: This is an invasion. A country without secure borders is not a country. Border security IS national security.

The post Biden’s Border Crisis Continues With The Worst June On Record appeared first on www.gop.gov.

Today, Speaker Pelosi will bring up for a vote House Democrats’ radical “Abortion on Demand Until Birth Act” (also known as the “Women’s Health Protection Act”) and the “Ensuring Access to Abortion Act.” Both bills go much further than codifying Roe v. Wade and would legalize abortion for all nine months of pregnancy across the country while undermining the health and safety of women.

Yesterday, Speaker Pelosi confirmed Democrats’ radical agenda by saying abortion is “core to who we are. It’s about freedom…” BUT 80% of Americans believe late-term abortion should be illegal.

MAKE NO MISTAKE: The Supreme Court’s reversal of Roe v. Wade will save COUNTLESS innocent lives, but House Republicans must continue to fight against Far-Left Democrats’ taxpayer funded abortion on demand until birth agenda.

The post House Democrats Continue To Push Their Radical Abortion on Demand Until Birth Legislation appeared first on www.gop.gov.

Joe Biden’s inflation crisis is already expected to cost the average American household NEARLY $6,000 as they foot the bill for the skyrocketing cost of goods, but it will also cost the average American worker OVER $3,000 in annual income, according to a new analysis. This new analysis comes on the heels of June’s Consumer Price Index (CPI) report, which was “much hotter” than expected as inflation hit its highest rate since December 1981.

MAKE NO MISTAKE: Inflation is a tax on all Americans, and it is caused by Joe Biden and House Democrats’ out-of-control spending. Democrat one-party rule in Washington is making it impossible to achieve the American dream for millions of Americans.

The post Biden’s Inflation Tax is Costing the Average American Worker Over $3,000 in Annual Income appeared first on www.gop.gov. 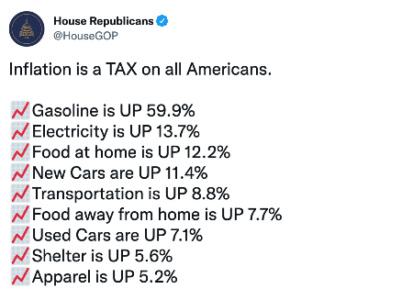 The Consumer Price Index (CPI), a key inflation index, came in “much hotter” than expected, hitting its highest rate in OVER 40 years. The CPIsoared 9.1% from a year ago, its highest rate since December 1981. Former President Obama’s Chair of the Council of Economic Advisers Jason Furman said that June’s inflation report was “brutal.”

NEVER FORGET: Last July, Joe Biden told the American people that skyrocketing inflation was “temporary.” Biden was wrong, just as he has been about every major economic issue facing America.

MAKE NO MISTAKE: Inflation is a tax on ALL Americans, and it has steadily increased over the span of Joe Biden’s failed presidency. As inflation has continued to skyrocket, wages have actually DECREASED.

The post Inflation Soared To A New 41-Year High In June appeared first on www.gop.gov.

Instead of working with House Republicans to address America’s mental health crisis, harden our schools, expand information sharing, and increase enforcement of laws already on the books, House Democrats are pushing H.R. 6538, or the Active Shooter Alert Act of 2022. This bill is a redundant federal alert system that does nothing but expand Washington bureaucracy, waste taxpayer dollars, and vilify firearms.

MAKE NO MISTAKE: House Republicans have put forward REAL solutions to help prevent tragedy. Democrats are focused on pushing their radical and wasteful agenda instead.

The post House Dems Push Redundant ‘Gun’ Bill That Does Nothing to Prevent Tragedy appeared first on www.gop.gov.

Americans are paying more for just about everything while making less, our southern border is in the midst of an unprecedented border crisis, and we are paying historically high prices for gas. In short, Democrat one-party rule in Washington has put Americans in a constant state of crisis.

It’s not surprising that only 13% of Americans think the country is “on the right track,” according to a New York Times/Siena College poll. This marks the lowest rating since the 2008 recession. This report comes as consumers’ inflation expectations reached the highest rate in the New York Federal Reserve’s eleven-year history.

The post Just 13% of the Country Believes the Country is on the Right Track Under Democrat One-Party Rule appeared first on www.gop.gov.

A new Monmouth University Poll shows that not only has the percentage of Americans reporting they are struggling financially jumped nearly 20 points over the past year, but nearly 60% of Americans say the federal government is responsible. This is the highest percentage in the history of this poll.

Because of this financial burden, only 38% of Americans say they are “extremely” proud to be an American—another historic low.

The post Americans Know Exactly Who to Blame for This Economic Crisis—Biden and House Democrats appeared first on www.gop.gov.

This morning’s decision by the Supreme Court opens the door for the Biden administration to recklessly end President Trump’s Migrant Protection Protocols, or the ‘Remain in Mexico’ program. This program requires illegal immigrants who are awaiting asylum claims in the U.S. to stay in Mexico until their cases are adjudicated.

MAKE NO MISTAKE: Ending the ‘Remain in Mexico’ program will only continue to incentivize a surge at our border by migrants who believe they have an open invitation to stay in the U.S. regardless of status. The Biden administration MUST end their mass release policy that endangers our communities.

The post The Biden Admin is Fighting to End Remain in Mexico, Making the Historic Border Crisis Even Worse appeared first on www.gop.gov.